oh boy, things keep happening and then it all piles up and then it becomes overwhelming to even think about writing about it all. and now it’s 10:56pm and i should be going to bed, but i worked the late shift all last week so i am used to going to bed at 1am, so why not write?

emma was here!!!!! and oh did we have adventures. but before i get into that, more big news! the day emma arrived i found out the land was through probate! i don’t believe i’ve mentioned this yet, so here is what was happening: the man whose share i planned to buy of the co-op on the wee island had passed away at the end of last year, so his will was in probate until now. now that it is out, it means i can buy it. so hopefully, soon…… now back to the star of this post. i think my favourite adventure was when we tried to bike up the mountain to get to the lake that’s up there. my dad had said it would take us about two hours to get there via the old logging roads, and when we looked at google maps ourselves we verified this and that it was about 20km from the gate. off we went, packed lunches and water and headed up the decommissioned roads that were now heavily used by mountain-bikers. so the bike i was getting ready for emma was an old road bike, a ten speed with skinny tires. i ended up using it while she was here because my mountain bike fit her better. this is not really a bicycle to use on mountainous old logging roads. we spent a lot of time pushing the bikes up due to the condition of the roads and this continued for about 6km until we ascended a ridge and walked our bikes down the steep switchback-y boulder-y road on the other side. the road that we said was going to be horrendous to get back up again. it was. when we got to the bottom though, we were in the river valley and it was mostly flat and foresty and lovely, then we got back onto in-use roads and it was even easier. after about 10-11km we came to a new clearcut and started seeing trucks. around this point the road started going fairly gradually up and up. after about 14k we were at 3.5 hours of biking and were questioning whether we should keep going. we wanted to get to the pool that night to sauna (and shower) before it closed, and a big truck had just stopped and told us there was active logging up ahead. we decided to call it quits and turn back just as another truck stopped and told us they’d prefer if we weren’t there. it made the loggers nervous to be working when bikes were passing through. they also told us that we could come back on the weekend when the gates were open and no logging was happening. that we could DRIVE up! ha! well i guess if i’d done research i might’ve known this. but it was a really nice ride, you see so much more on a bike than in a car. we were about 6k from the lake when we turned back, so maybe another 1.5 hours? apparently the last bit of road is really rough and all uphill. i think we’re going to have to drive up next time emma comes to visit. 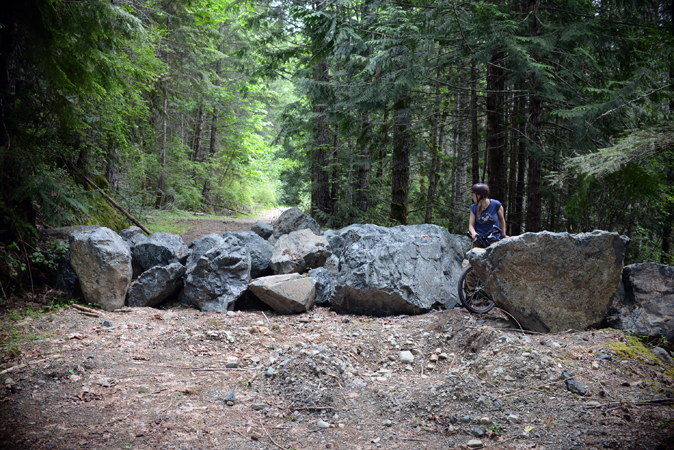 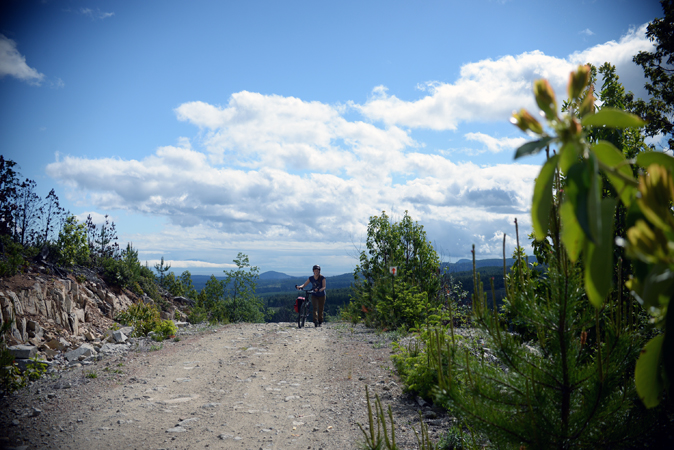 the first thing we went to do after she arrived was to go wandering in the woods across the river. we went in a direction i’d not yet gone and found a gorgeous wooded creek that was built-up as salmon habitat with big logs and rocks. the creek felt like magic, it was so lush and peaceful in there. and we found OYSTER mushrooms!!!! ahh!!! this was my first time finding edible mushrooms in the woods so i was/am super excited. they were soooo good, sautéed in chicken sausage oil. then on our next woods wander we found MORE in the maple/alder grove up river. also on that wander we saw an elk! it stared at us from maybe 150m away as we stared back at it, then it slowly turned around and disappeared into the wood. 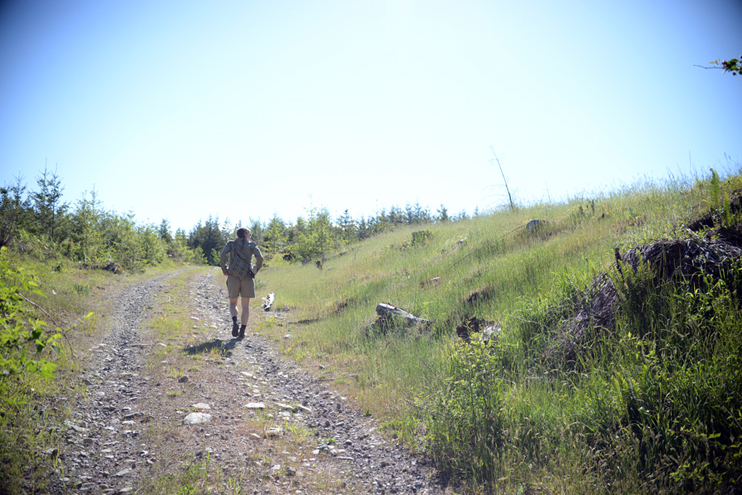 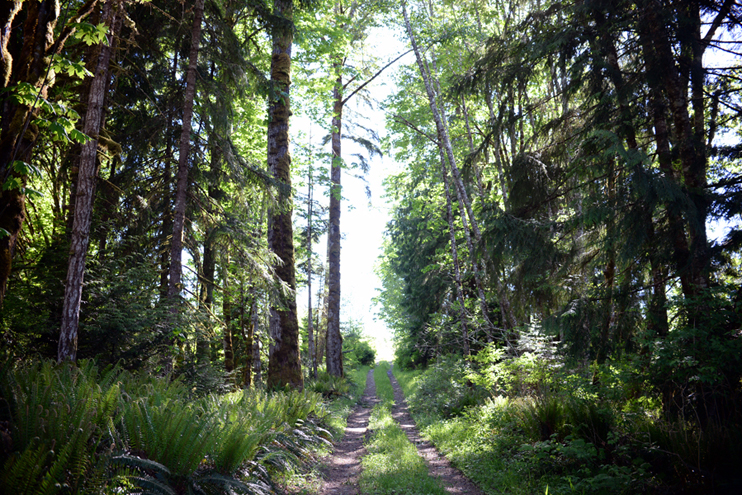 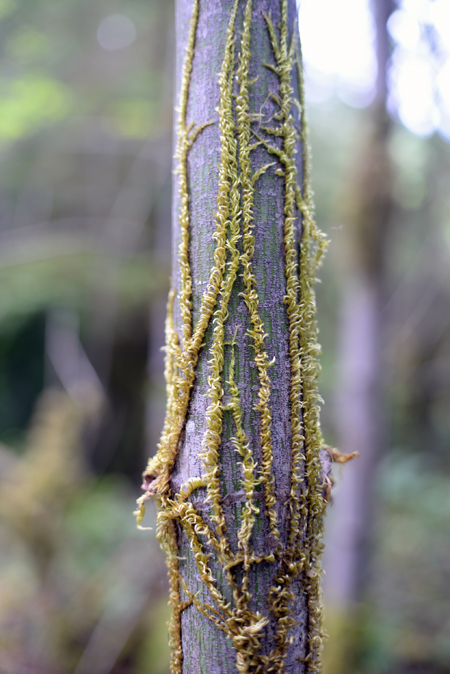 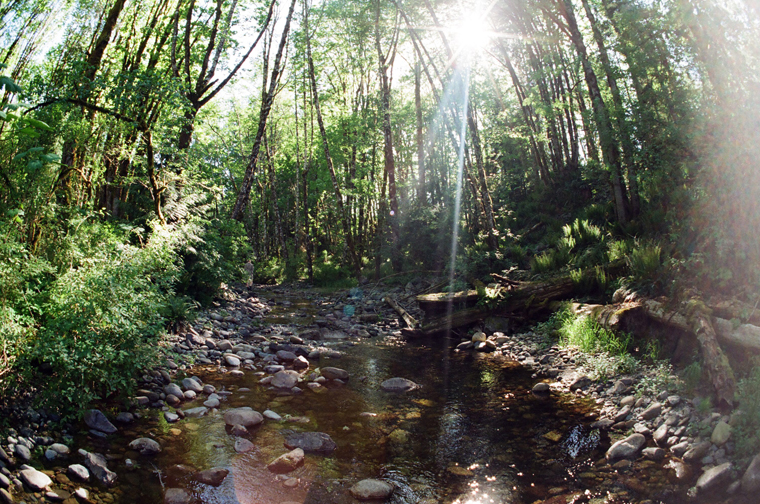 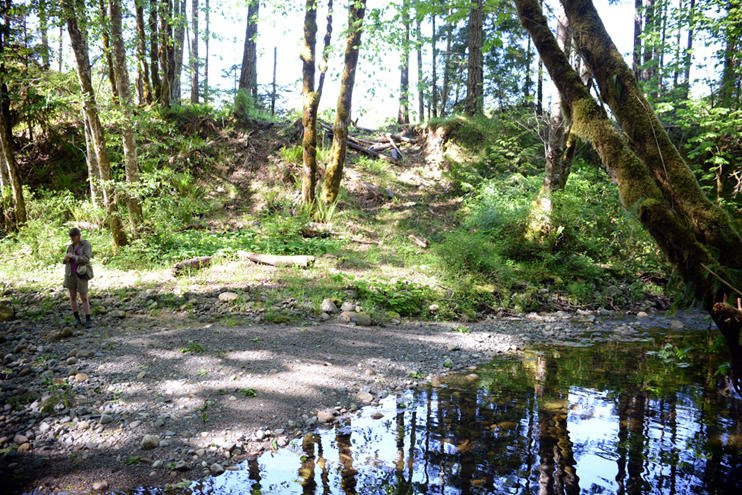 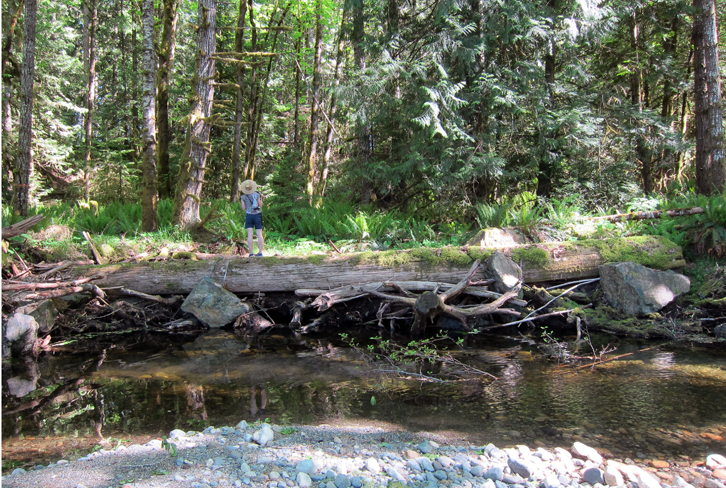 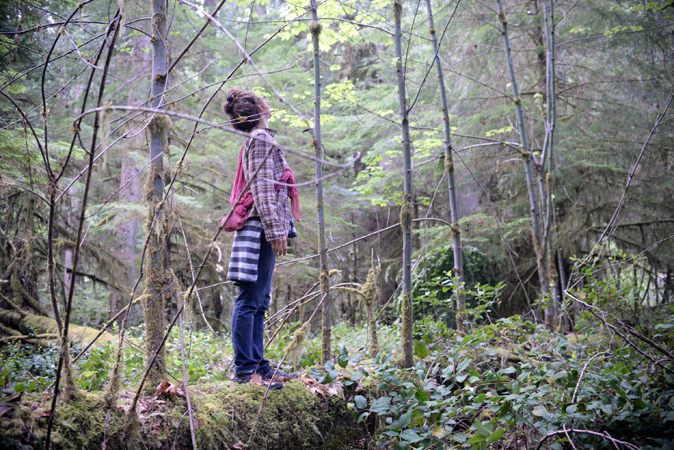 big adventure #2 was to go check out the land on the wee island! emma’s body hadn’t been doing well with biking in winnipeg, so she was worried about a long ride, but her honey coaxed her into the idea and told her to bring advil just in case, and it was so lucky he did, because she went on her first bike trip with gear/panniers and her body was totally happy! she’s thinking it’s because the bike has gears and fits her better than the bikes at home. being the prairie, we tended mainly to ride single-speeds there, but after this trip she was thinking of rigging up a bike with gears upon arriving home. our first night there we headed down to the beach to cook dinner. it was a perfect evening, the ocean flat calm and a haze in the air. we found nettle on the way to add to our dinner, and cooked with saltwater which ended up being a mistake – it was way too salty! oh well. after we’d finished cooking, a group of men and their honey dog came down, one was an old friend, one i had met once before and the other four became new friends. they invited us to hop into their canoes to paddle one beach over for a sunset musical cook-out. i was ecstatic because i was thinking i wasn’t going to get into a canoe this summer and the conditions were perfect. the music was lovely – two guitars, a mandolin and plenty of talent, and they made dee-licious salmon and steak. yu-um. THEN, preparing to leave sometime late into the evening, c went down to the water and said oh, we might see some phosphorescence. emma said, what’s that? i said, you should wait and see. o h  m y. her mind was blown, she couldn’t get over it, it was SO wonderfull to watch. and they WERE really good that night, i hadn’t seen phosphorescence in years myself, and as the paddle sliced through, it was outlined dazzlingly by thousands of tiny specks of light. what magic is this? really. the next day we went to hear the marimba band practice. they are my favourite band and oh i had missed them more than i knew. tears and tears wouldn’t stop coming. and i danced, let it all out. emma said they felt like they were wrapping around her head and body and filling up the space around her, cradling her. 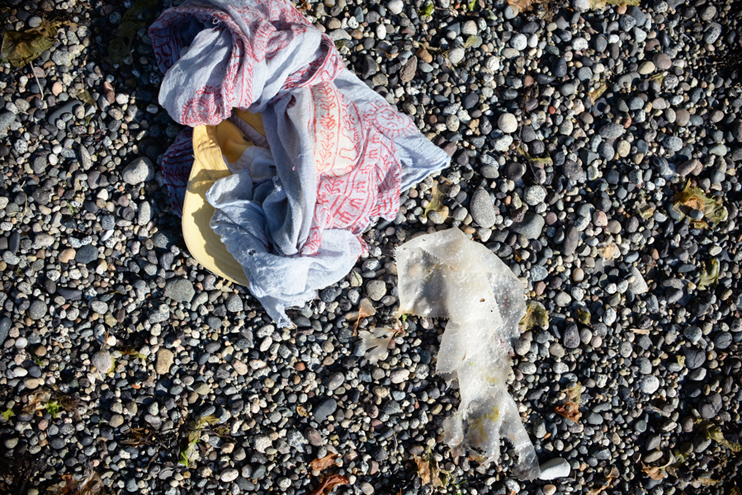 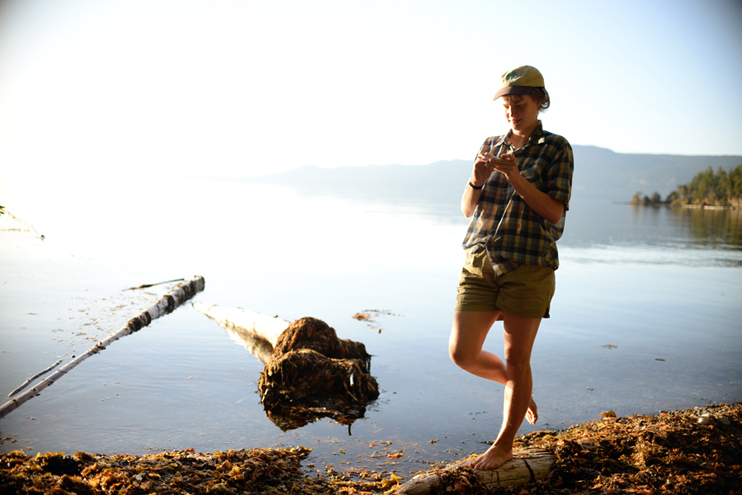 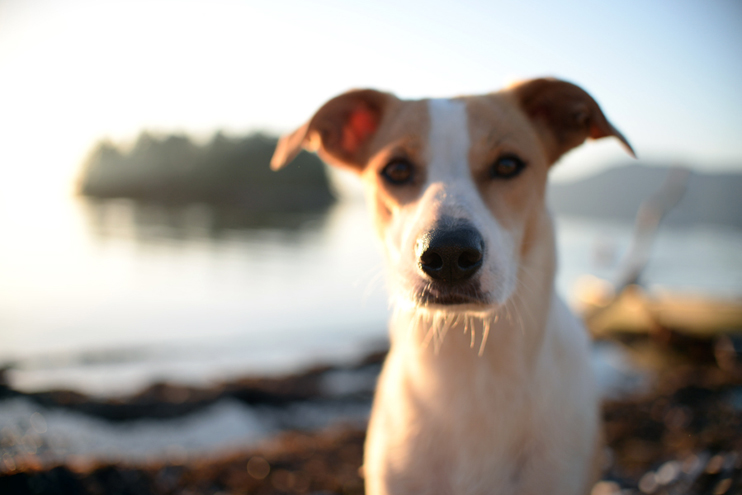 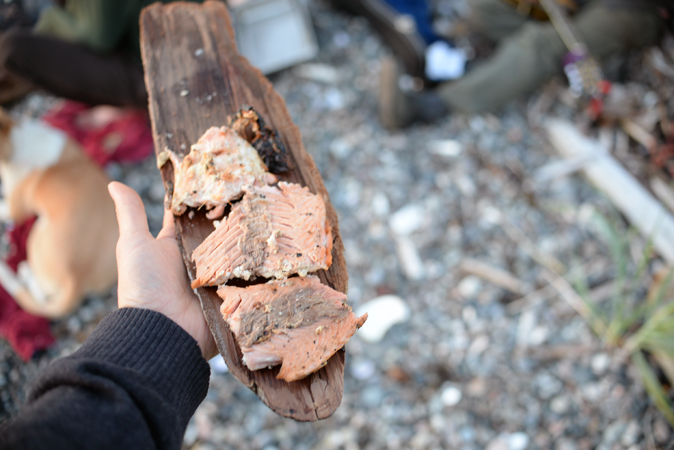 our last big adventure was to head out to tofino/ucluelet for some wild west coast. here we danced and sat and wove and read and explored on the beaches. emma experienced her first tide-pools of her adult life. we checked out cute stores in town and bought art supplies and quilt squares at the new art store in tofino. here we fell in love with the woman with the lulling voice and cowichan sweater and messy hair who was running the place. she told us she ran 10k almost every day, up and down the beach, barefoot. she doesn’t own a pair of running shoes. emma got a treat at the bakery and i figured i might as well indulge so i bought a loaf of bread and then a block of organic butter at the co-op, which i then devoured over the next two days – with fruit-sweetened blueberry jam. we were staying at the parks canada campground there, and leaving it for the first time there was a stop sign beside the check-in booth. as i was pulling up to stop at it, the guy looked confused as to why i was slowing down, so i said, “are we stopping?” and he said “looks like that.” and for some reason emma and i just found this totally hilarious and couldn’t stop laughing as we pulled away and continued on down the highway. 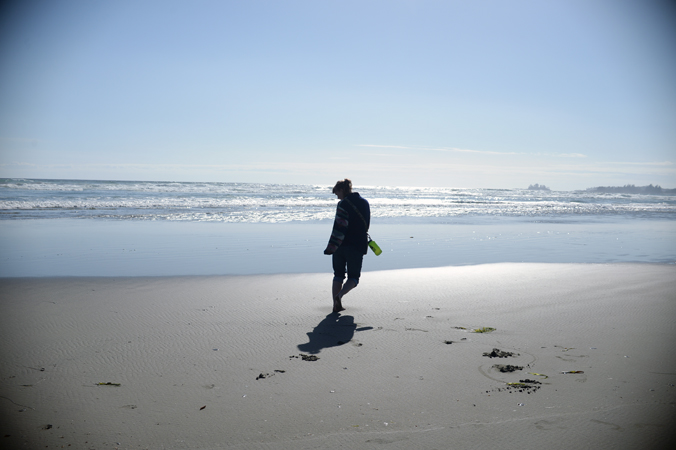 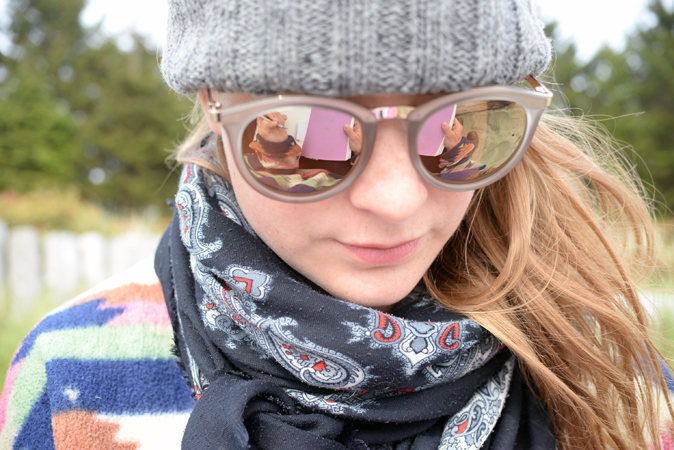 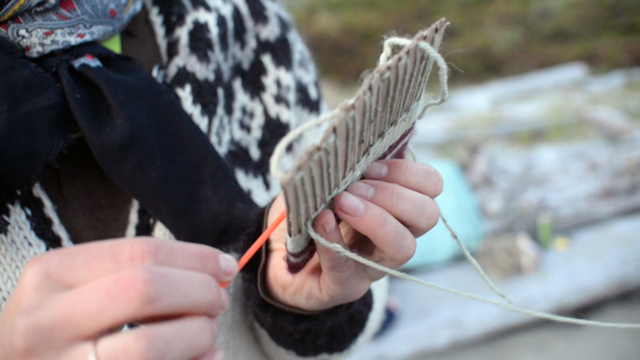 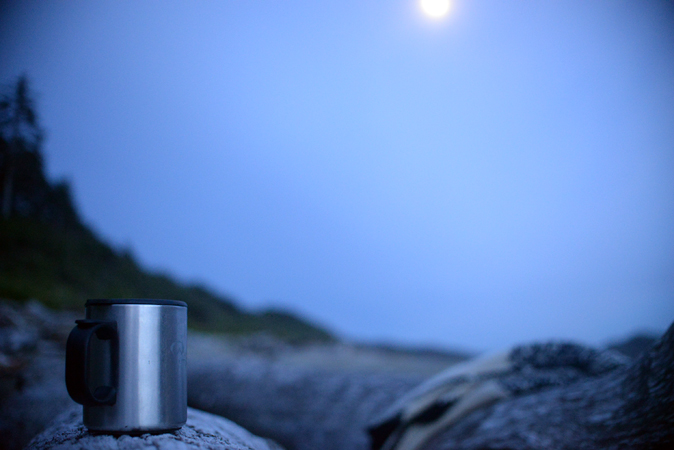 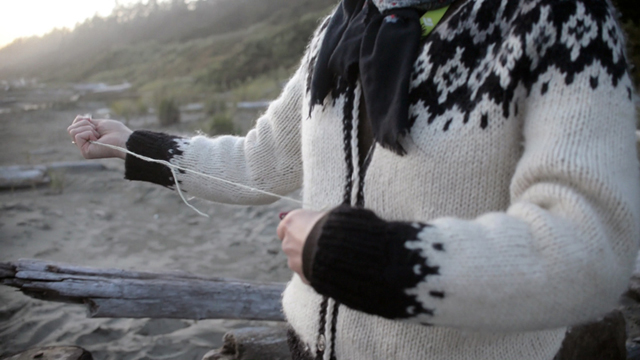 amidst all the big adventures we had the mini adventures around the home base. two shows at the hall, the farmers market, heather and sio over for dinner, walks down to the river. some highlights from the plentiful gratitude list while emma was here: my partner in crime with emma. being with a friend so good and being given the opportunity to be a better, kinder, loving more gracious me. the joy. big cedars in the forest, the feelings they move around inside. corrie and sheldon and maya and mana and heather and sio and us, all at the hall together. community. so many things to feel happy about. the way adventures go and grow. CANOEING!!! honey-dog so cute. dogs in general. they are love. the night birds and frogs and stars. emma – her being of light. the flow of the days. the access the logging roads grant us into the mountains. an a m a z i n g bike ride. showers today! the ocean out there, the wilderness of it. this job i have that enables me to go out and have fun times! emma coming to visit me for two whole weeks! to be on this earth. 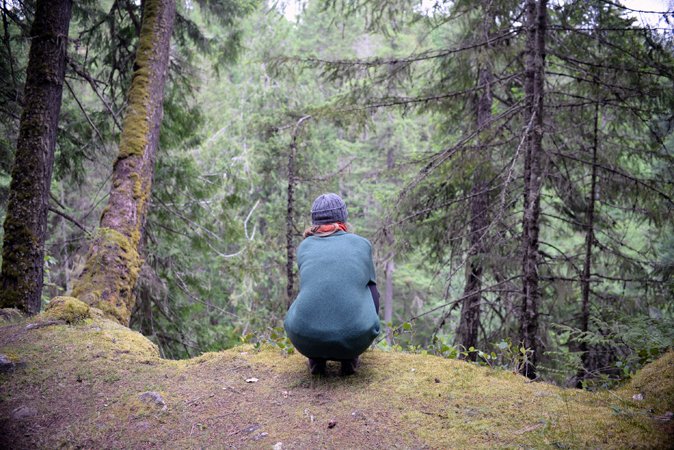 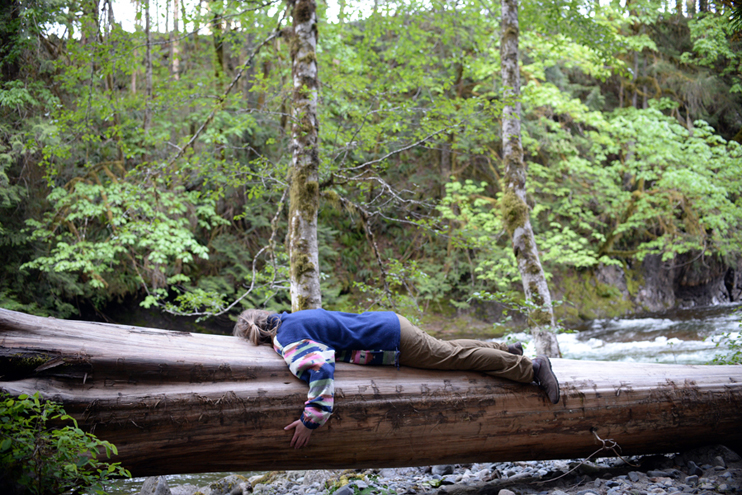 and the list of wonder i texted emma after she left: dinner on the beach, paddling through phosphorescence, guitars, sunset and salmon with honey and the men, biking up the mountain and down the other side, dancing beside the ocean, birds hill on the ferry, thrift stores and too many new clothes, camping on the land with no snooze button, marimbas and a woven hut, BIKE TRIPS, the creek of the pacific salmon, scratching up legs in the clear cuts, holding baby sio, the moss vortex, wandering through pathless woods, the woman with the wide-set eyes and messy hair, khurue cuddles, showering under a bag, showering at the pool, showering at brian’s, showering at parks canada, too many pancakes, giggling way past bedtime, are we stopping? 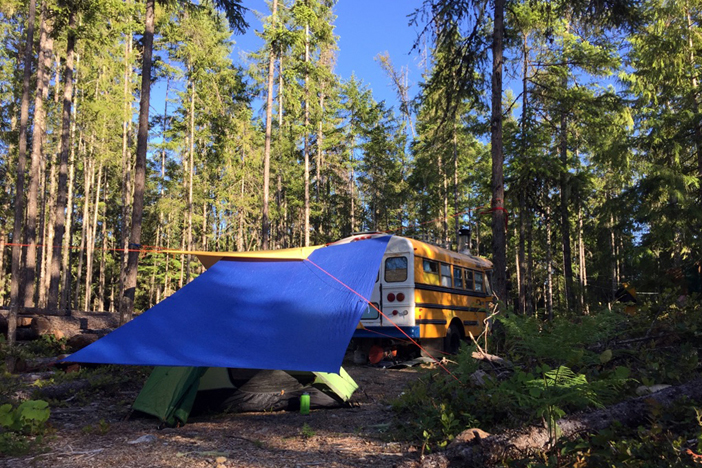 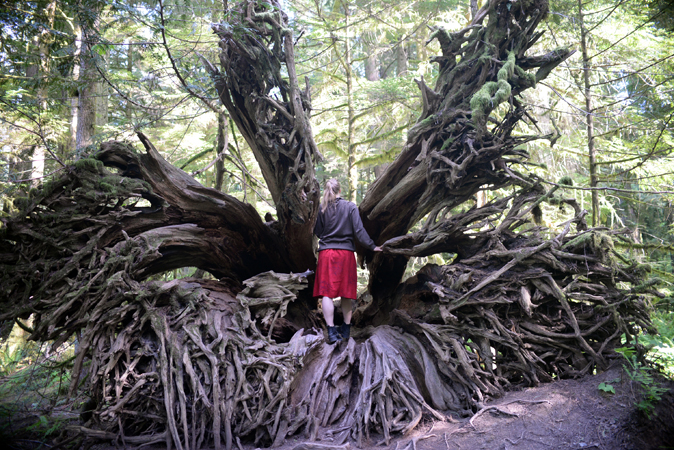 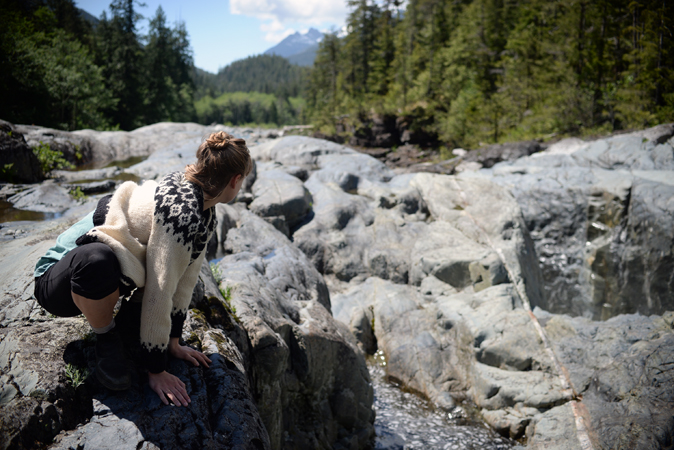