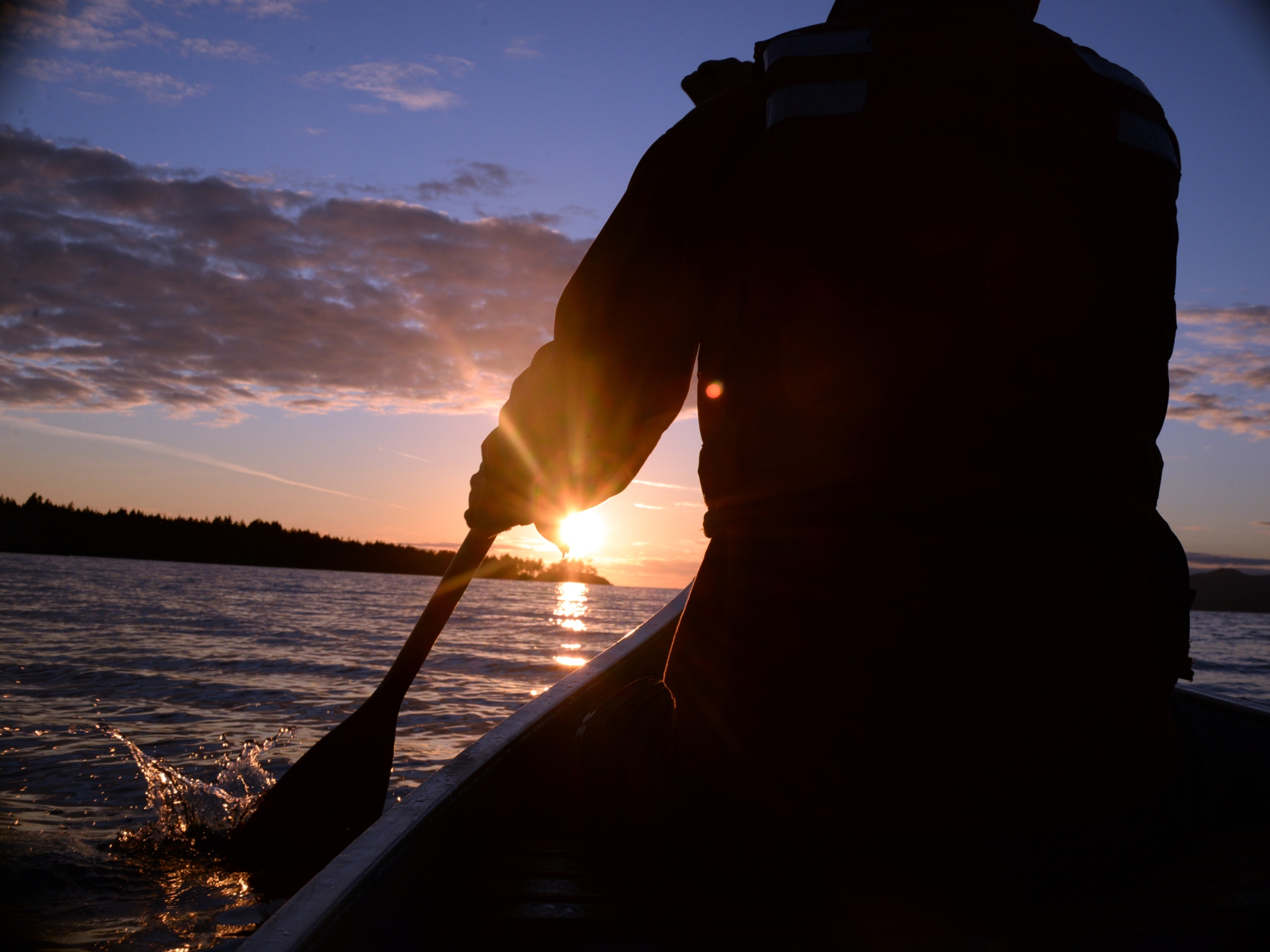 the title of this post is a quote from valeria. and how she speaks the truth: summer takes you and runs away with you. believe me people, i would like to be posting more than i am, the events and adventures and thoughts keep happening, and they are forming a backlog in my brain, but alas, summer… 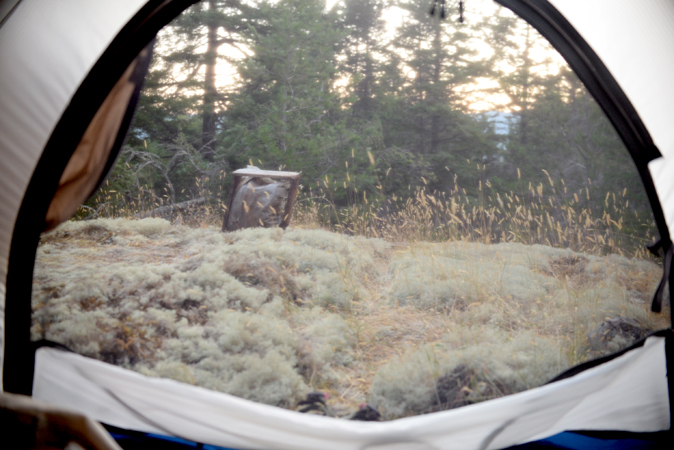 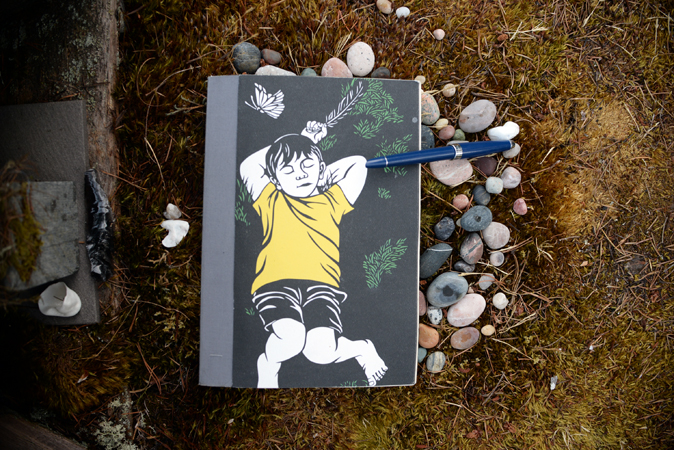 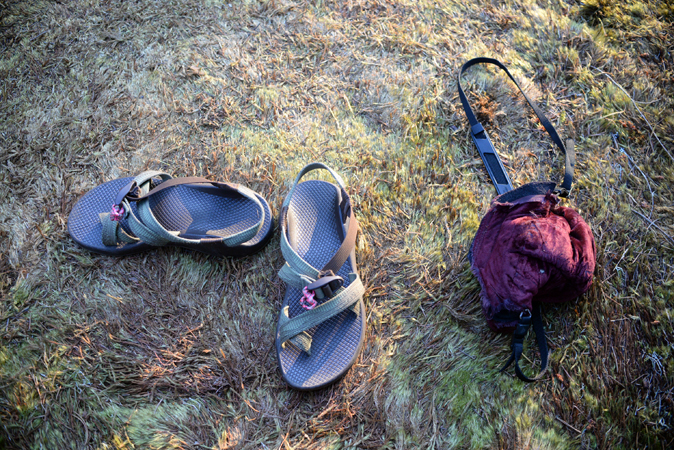 first, the most exciting thing: I HAVE PAID FOR THE LAND!!! it is now mine!!!! eeeeeeeeeeeeeeeeeeeeeee!!!!! as i said in the last post, i went to spend my birthday week there, and so much happened! now that it’s mine, i feel like i can’t spend enough time over there, there is so much to do! i spent most of my work time falling trees and bucking up firewood. that’s right – falling trees. i learned how to fall trees! (more eeeeeeeee’s). true i wrote a few posts back, that i learned how to fell a small tree, but i didn’t get practice afterward, and so forgot since it was some months ago. this time vaughan, my land partner (that’s right, LAND PARTNER.) (can you tell i am excited about many things right now?), volunteered to come over and show me how to fall trees. he did one, a little over a foot in diameter maybe, and then i did three upright ones, and one leaning one. the first one he fell brought tears to my eyes when it came crashing down, it was just such a major striking thing. a living tree, falling over. the smash of it. and because i was so caught up in the act of learning, i forgot to give thanks to the tree beforehand. but after that one i remembered to be grateful, and honestly folks, i kind of love falling trees. i like the precision of it, i love using my chainsaw, and that moment during the last cut, when the tree just begins it’s lean into the tip – what a thrill. the moment you pull the saw out and the tree goes from the slow lean into the fast fall. there is poetry there. so vaughan taught me that one way, and then a few days later david came over and taught me another way of making the cuts. the way david taught me is the way dharma taught me those few months ago, and i suppose is the direction in which i am leaning to continue using, since two people out of three cut that way. but i have also asked my landlord if he will show me in the next little while, so i’ll have lots of expertise to draw from. i also need practice, a tree every couple of days would be good, but that would get ridiculous wouldn’t it. so i am wondering if falling the stumps of the trees previously fallen will work out as practice. with david we fell five more in total, two of which we needed to fall not in the direction they were leaning, so that was a learning experience. vaughan told me to always fall a tree in the direction it wants to, and i think i will continue with that for the first while anyway. i was happy to get the first five trees all bucked up, both because it will now hopefully have enough time to season before i need it in the fall, and because it has been so hot and dry here these past weeks, that there may be a ban on all machine operating soon, in case of fire. next trip over i’ll have a whole bunch of splitting to do. 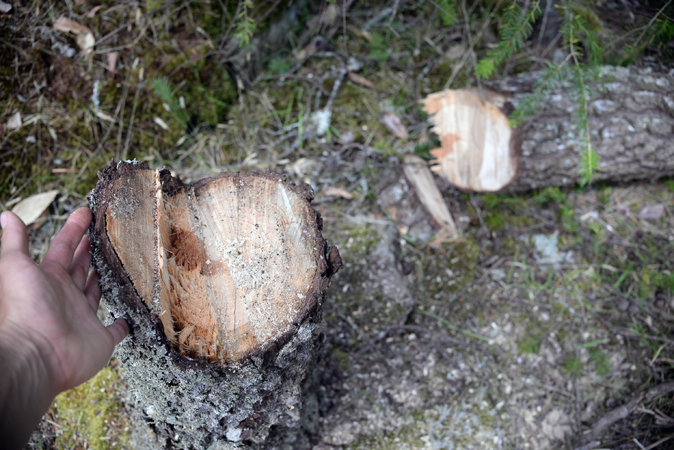 alright! what a busy week. on sunday there was a fundraiser for an old friend who now has an aggressive form of cancer. he is younger than me. ~sometimes you have to wonder about life.~ so many people pulled together to have this fundraiser for him, those people donated their time and services for free, and all of it was put up online for silent auction. the culmination was at the pub where things were auctioned off in batches. the sun was dipping over the ocean in the west, bathing everyone in golden light. rosalind was circulating in sparkles and stockings and heels, looking spectacular, drumming up bids. i sat at a table with friends, sharing chicken kebabs and fries and spanakopita and stories. i fall in love with this community over and over.

i ended up getting the thing i really wanted! a barge trip for one vehicle!!! sweeeeet! so now i’ve got to find a truck on this side, load it up with building supplies and get it over there to start building the shed i want before i move the bus over. the shed is to hold the room full of stuff i currently have stored at dads, which i will transport in the bus when i move it over. over the span of the week there, my feelings started changing. i started out feeling like i wasn’t ready to be there full time yet. i like my job on this side (and i like making money), that is the main reason. my big nebulous plan when i decided to move back west was to get to the wee island and then leave it for a couple of months of the year to do seasonal work. but it’s hard to give up a good job – that you like – when you have one, you know? then over the course of that week, i went from those feelings to feeling like – no, i don’t want to leave! i want to be THERE. all the time. so i guess i have to figure that one out. this trip was 6 nights, which is the longest i’ve been there since i moved away 12 years ago. 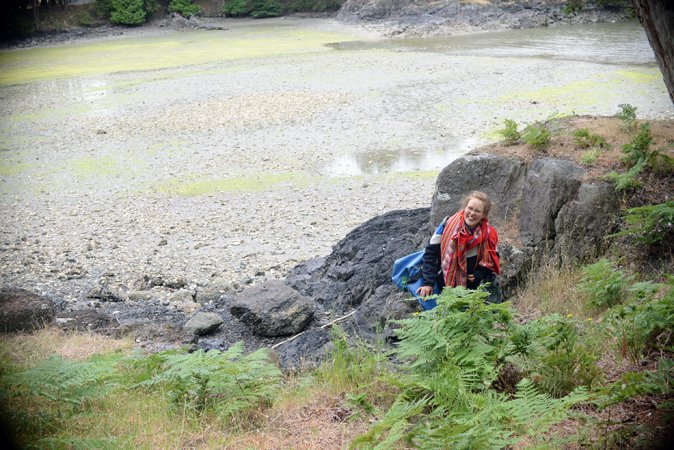 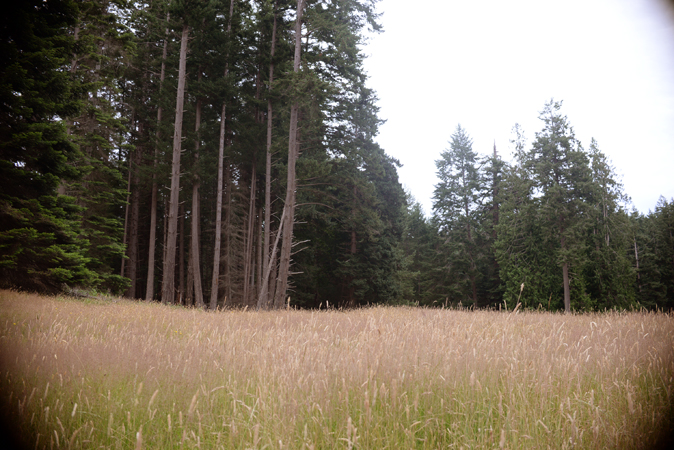 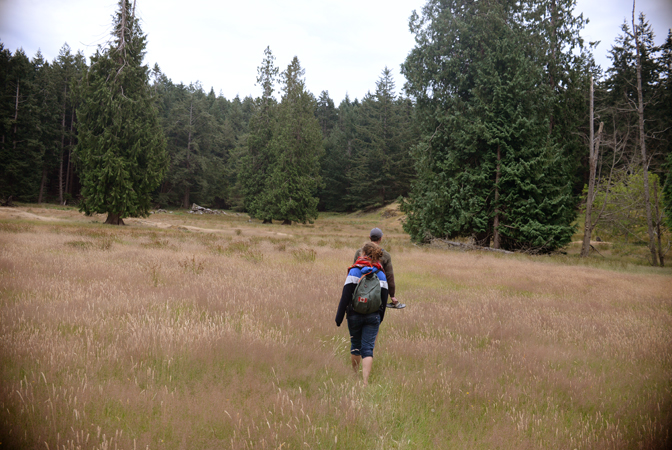 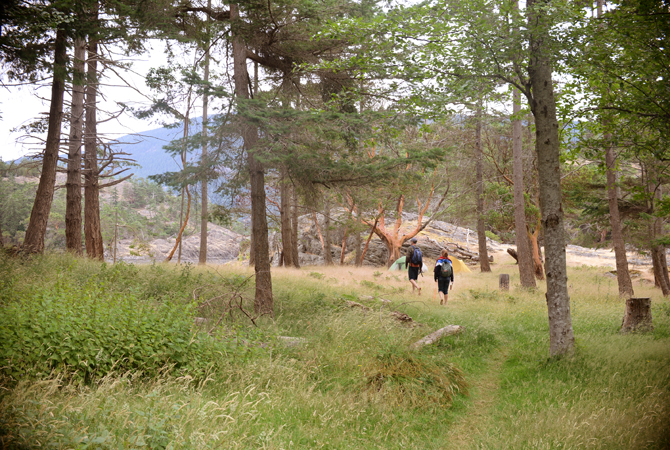 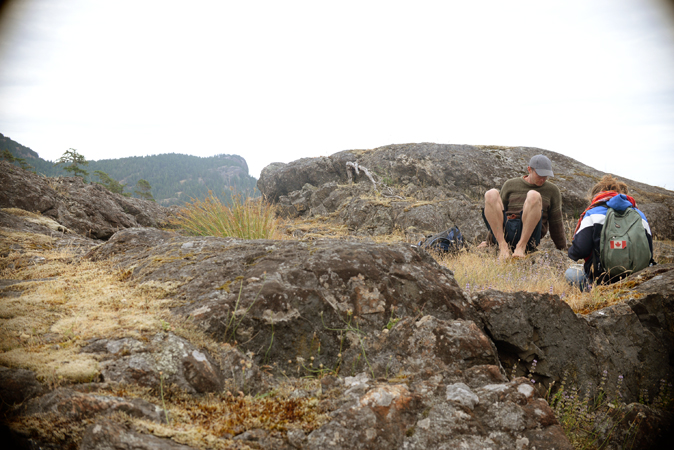 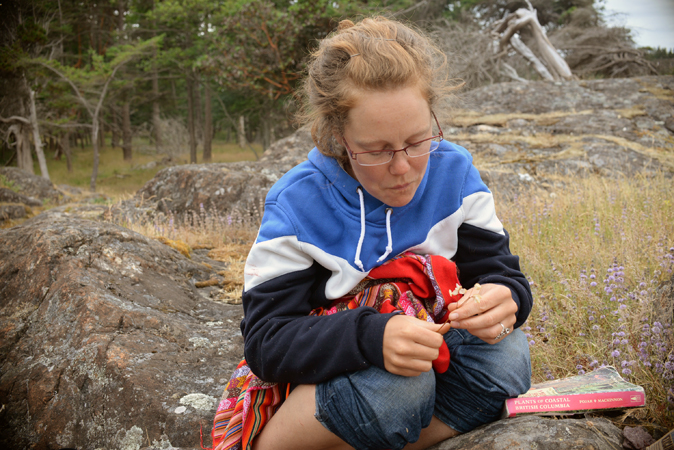 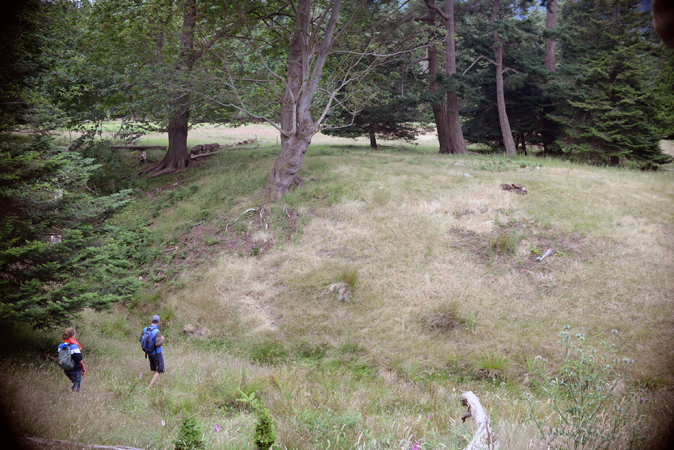 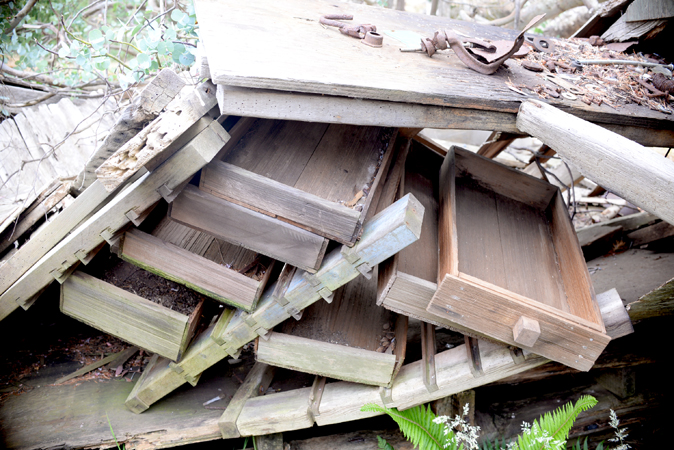 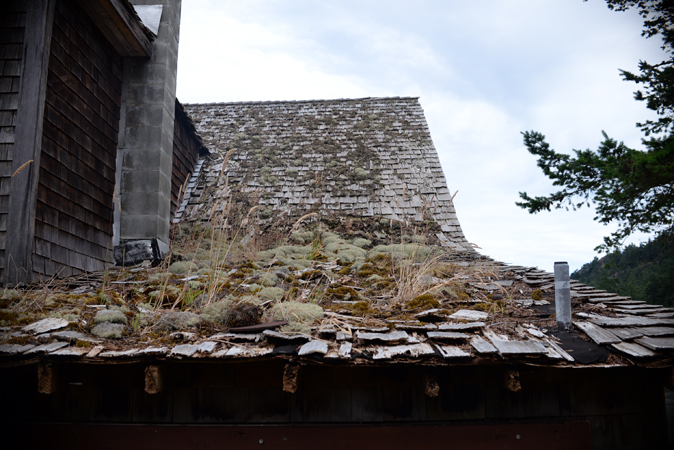 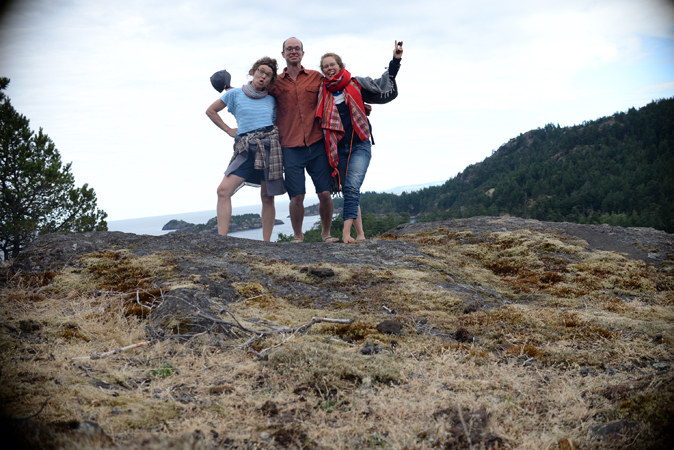 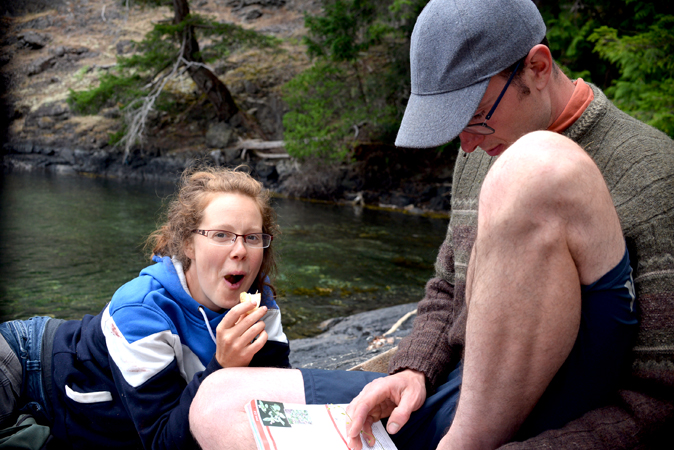 the day after i arrived i went paddling to one of the smaller islands that surround the wee island, with new friends carly and carson. oh was fun had. for one – i LOVE canoeing. every time. i swear. i love the motion of my arms moving the paddle. i love the paddle moving through the water. i love loading and organizing the canoe. i love getting in the canoe. i love sitting in the canoe and the many different positions that takes. i love jumping out of the canoe (too cold for that this trip), i could probably go on… it feels like home. i have had so little ocean paddling experience that i would call it none, luckily carson is a sailor and has had much, and could tell us about currents and winds and tides and how they all mix together. i loved paddling over the swells, they got big and swirly when the islands got close together, and at first i was worried because i get motion sick (though it’s more rare in a canoe), but nope, not this time. we had a tail wind and the waves were decent, and oh the roll underneath us, it was like rapids, but deeper, with such mass to it. steering through it was thrilling. i can’t say i am going to get addicted to ocean paddling, i am a river girl, i think, but this was sweet. it was about 7k to the small island, which took us 1h45m with a NW wind and an ebbing tide. it was my first time to this island and it was lovely. an old homestead from way way back. we meandered from one side to the other, down to the ocean, up to a bluff. took in the massive old mama trees, explored the driftwood, identified plants, ate yummy food, sampled unripe apples, laughed lots, talked about filming a horror flick there (carly), which was extra funny because none of us like horror films. the list of things we brought with us: a date square, 2 blankets, 5 paddles (one broken), a tape measure, an invisible kaleidoscope and a plant identification book (there was actually more, but this list feels pretty complete). 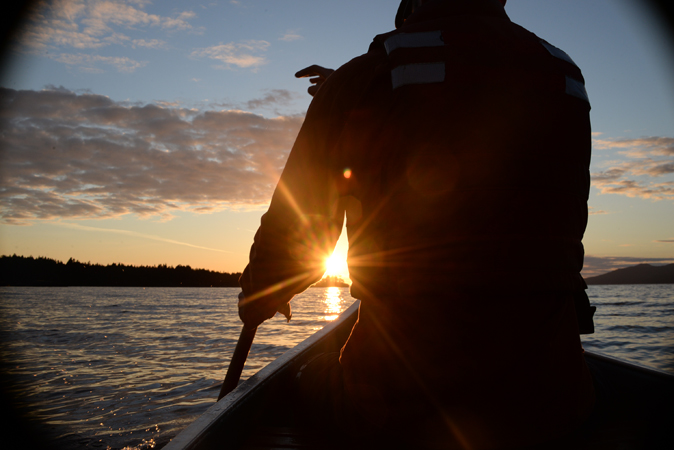 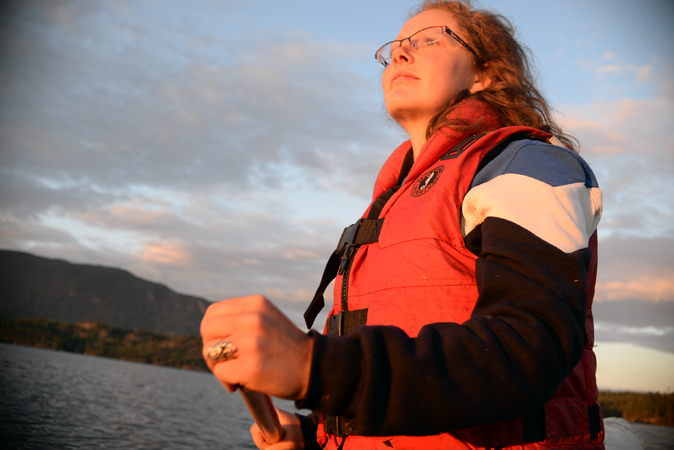 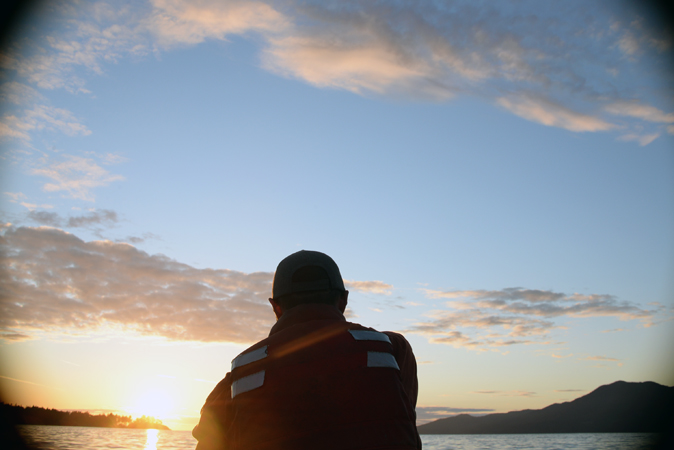 on thursday i had a pre-birthday womens gathering/celebration for paying for the land/anniversary of twenty years from when i first came to the island. it was for 7pm at the beach and i thought i would have a bit of alone time because i was heading down there early, but guess what? i could hear laughter as i came down the path, and when i turned the bend and looked, there were three naked women lounging in the early evening light! so it immediately became a naked lady party at the beach. every time anyone came down after that it seemed like they were wearing too many clothes and they instantly disrobed. sarahbella sang me an incredible birthday lullaby that swum through my soul, i had my first ocean swim of the year, we talked of breast massage and jade eggs, and valeria declared the country of summer. in the midst of it all we indulged in jess’ wonder of date truffle made with coconut oil, carob and cardamom. that’s it, and it was deevine, i kid you not. A brought a scrumptious beet concoction i couldn’t eat enough of, on top of valeria’s chickpea bread, and there was local lavender/pepper loaf and olive oil and fresh tomatoes and blueberries and bliss. several times jess said, this is p e r f e c t, and i would have to say, i agree. 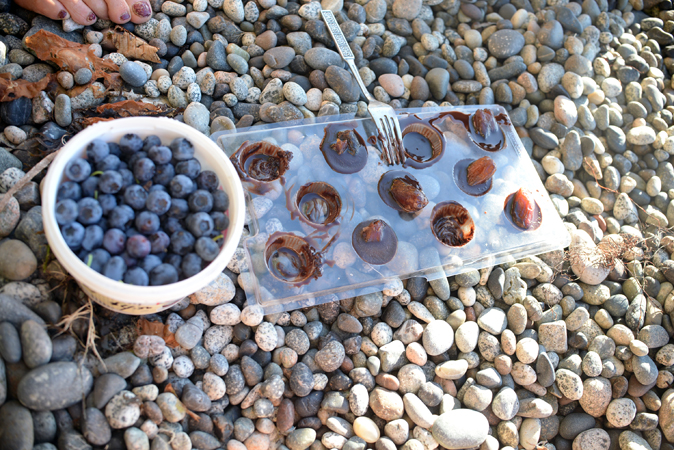 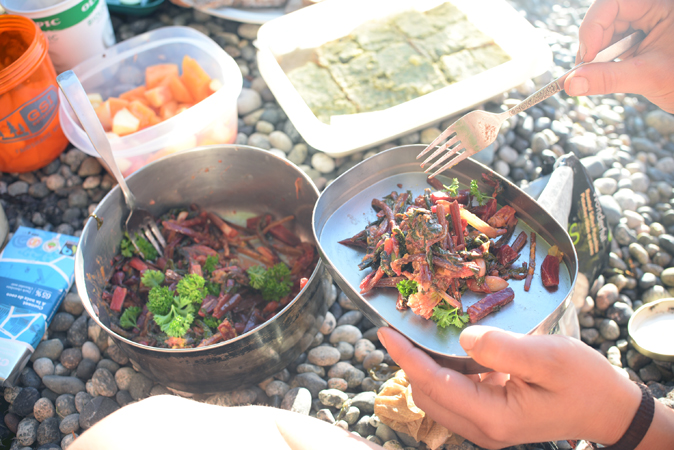 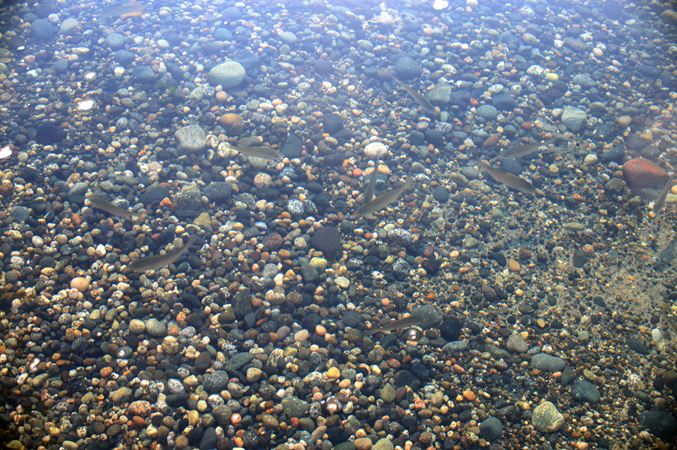 on my birthday i awoke to sunrise on the land at my potential house-site. i had usually been camping near the shack that is there, because it’s kind of become the base and is beside the driveway (and is flatter than the house-site), but with a little urging from katrina to see if i like the house-site as much as the area by the shack, i spent my last three nights camped there. and love it, i do. the wide sky there and its plethora of stars at night, the view of the distant big island, the way the edge of the bluff drops off into lush valley. i had to get up to make the first ferry, and at first wasn’t so excited about that, but really, what better way to start your birthday than with sunrise? i biked to the ferry and passed a hand painted sign that read ‘dust brought to you by emcon’, which made me laugh and laugh. read ‘the plains of passage’ (another in the clan of the cave bear series) on the boat, which i’d picked up at the community library earlier in the week. then disembarked on the other side for the long ride up the hill home in the sunshine. i had to make it back that day because of corrie and sheldon’s wedding, but that will have to wait til another post. 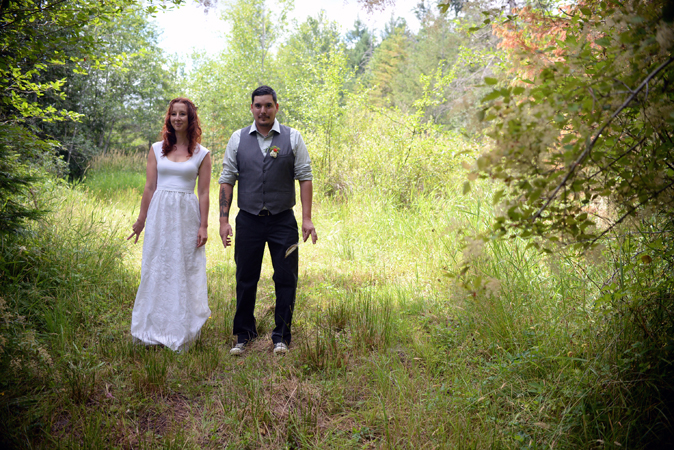