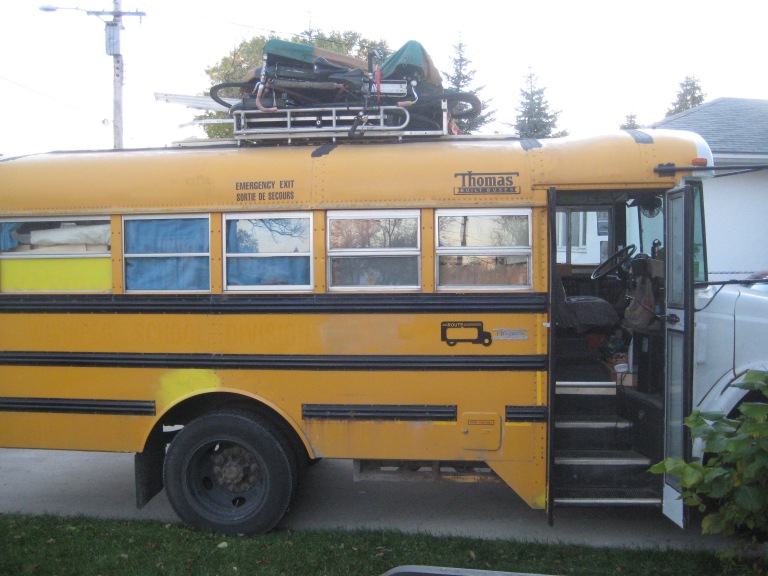 my cat is an escape artist. she cries and cries and cries every time i stop the bus, so i decided to get her a harness in order to take her outside. i have only once before tried putting a collar on her, which resulted in her arriving back at the door with her mouth bloody and jammed open. she had tried to get the collar off, and somehow got her jaw stuck under it, which must’ve confused the hell out of her so she had proceeded to try to claw it out of her mouth. i felt awful, and had not again tried, in the subsequent 12 years, any more of those shenanigans. but. her meowing was driving me crazy, so i figured why not a harness? there’s no way she could get out of a collar AND chest belt at the same time, right?

the first time we tried it, it went fine, she fussed a little but was too overwhelmed at the new outdoor space to pay it too much mind. the second time we tried it was in chaplin saskatchewan, i’d pulled over to take a short nap, and ended up parking on a slight sideways angle on the side of the road. the door side was angled up and the drivers side down, which meant gravity was working against the doors when i went to push them open. i didn’t feel like going out quite yet, so i harnessed her up and put her outside, keeping ahold of her with the leash/rope. about 30 seconds later i felt her tugging, and in the few seconds it took me to take a look under the bus where she had wandered, she had managed to work herself out of the chest collar and was having a go at the neck. so i dashed out – letting go of the doors (mm hmm ) –  and pulled her out while she growled like she was fighting another cat. well. once i got the collar off of her and went to go back inside, gravity had done the deed and slammed the doors behind me. locking them. i don’t know if all bus doors are like these ones, but i think this latching mechanism is pretty common. if you push the doors shut hard enough, the latch locks into place and you need a key to get back in. the key which i had left inside since i had no plan to leave the bus in the first place. the front door was locked, the back door was locked, the windows were locked, the only things not locked were the emergency exits in the roof, and i had never tried to open them from the outside before. i knew i had partially covered one with the edge of the roof rack when i installed it, but it could still be popped open on one side. so up we went, me and the cat. it took some turning (and worrying that it wasn’t going to work), but i got the rear one open, except that the arm of my bike trailer was sticking out over one corner of it and it would only open so far – maybe about eight inches. i was able to shove khurue through then i went to the front one and tried to open it, but the edge of the rack was over the side that was supposed to pop open, so it was of even less use. i went back to the rear hatch and pulled up harder. i figured i might as well try to squeeze through otherwise i’d have to unload and reload the whole rack which i was NOT interested in doing. it took jeremys help to get it all up there in the first place, so i knew it was not to be done unless it was the last resort. well, i did it. with the squishing and smooshing of my clothing i managed to squeeze through by what felt like a hair. phew. disaster averted. now every time i even get close to leaving the bus i make sure i have the spare keys on me, if not both sets. then, back on the road, the ABS light comes on! i think my bus must not have liked being in chaplin, though i liked it just fine. it went off again a town later after i stopped for gas, but has since come on again now that i have arrived in golden. this is apparently common with these buses, but it messes with the calm of not having any of my dash warning lights on. a known issue that may be the cause are the ABS sensors, but i have not yet been able to locate them to clean them off.

i said goodbye to jeremy in riding mountain, that will definitely be something mixed to process over time. it was a good setting though, under the tall trees in the early morning rainy light. a good way to say goodbye. shortly after leaving, a school bus passed me on the highway and waved at me! well! i had no idea! so every bus after that i waved at, but only got one more in response. 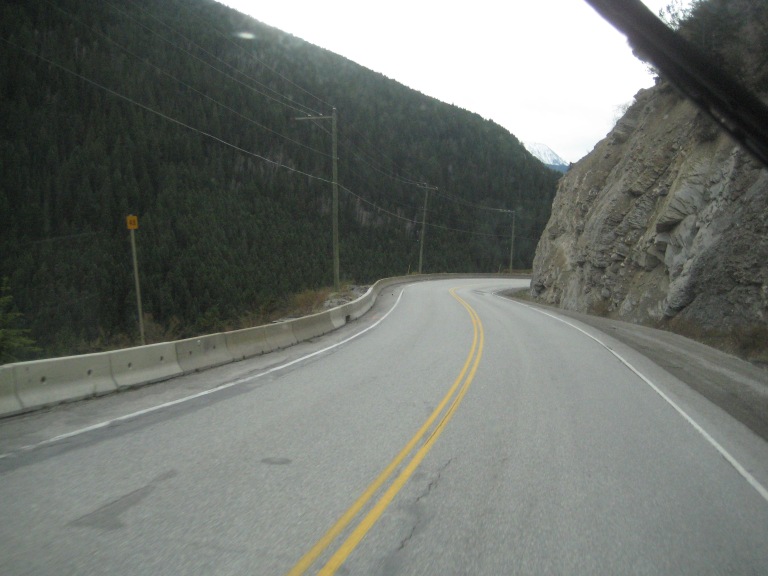 i must say, i love driving my bus. the deep gruff rumbling of the engine is like the purr of a cat to me. oh so sweet. and it is so strong. it hauls all of my things up over those mountain passes like it was meant to. yeah, i am smitten. i was planning on parking it after this move, to live in it as i build my future house, but the thought of it never driving again feels like a shame. if it were converted to veggie oil it would be incredible to travel around the continent in it. the cost of gas (diesel) for it has surprised me, though it shouldn’t really. i did do my research before leaving, but after driving a super fuel efficient honda for years, spending 75$ to go 300km seems exorbitant. thus far i have spent about 425$ on gas. i didn’t know that diesel froths as you pump it, so the first time i filled up the tank the gauge only read slightly above 3/4 full when i was done. jeremy clued me in and i now pump really slowly towards the end and watch the inside of the tank mouth to know when to stop, i can now get the gauge to above full.

i spent my second night on the road in a walmart parking lot, which was surprisingly quite nice. after years of not shopping at walmart i visited two in two different provinces in one day! i stopped in at the one in regina to get khurue her harness and to ask them if they allowed overnight parking. my dad suggested i ask in order to relax and not worry about it the whole night, so i figured i’d try them out in regina. the guy said sure. then in medicine hat i bought myself some hummus and asked an employee. she said no problem, and even suggested the side parking lot of the store where it would be a bit quieter.

i am now in golden for a few days visiting my dear friends and giving my gas pedal leg a rest. from here i will probably spend one more night on the road before arriving on the island. 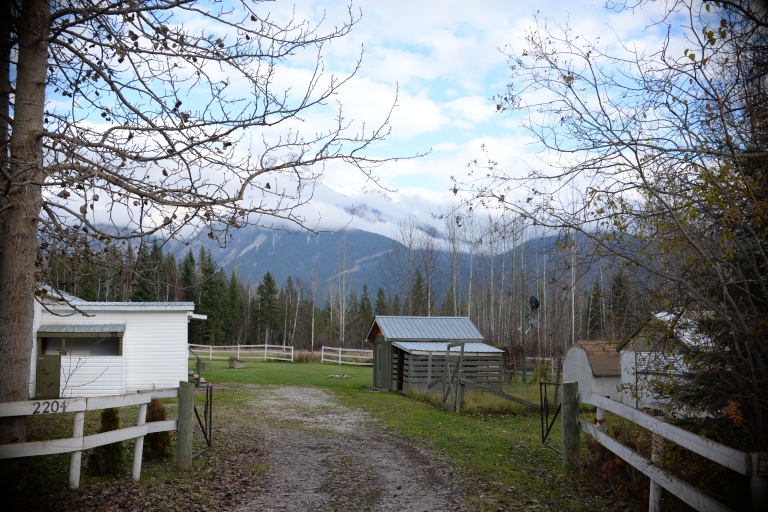 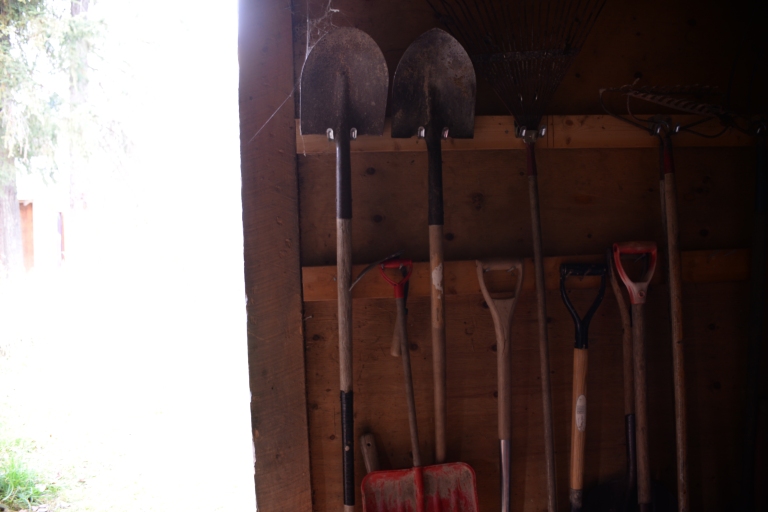