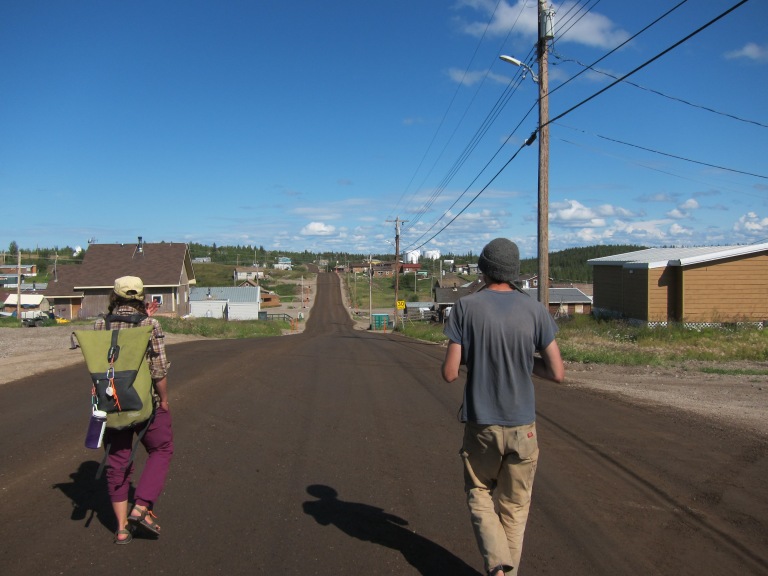 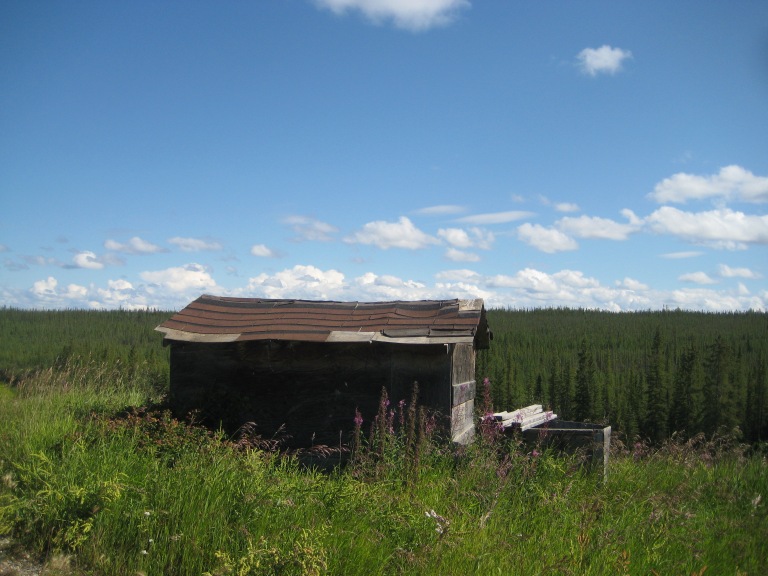 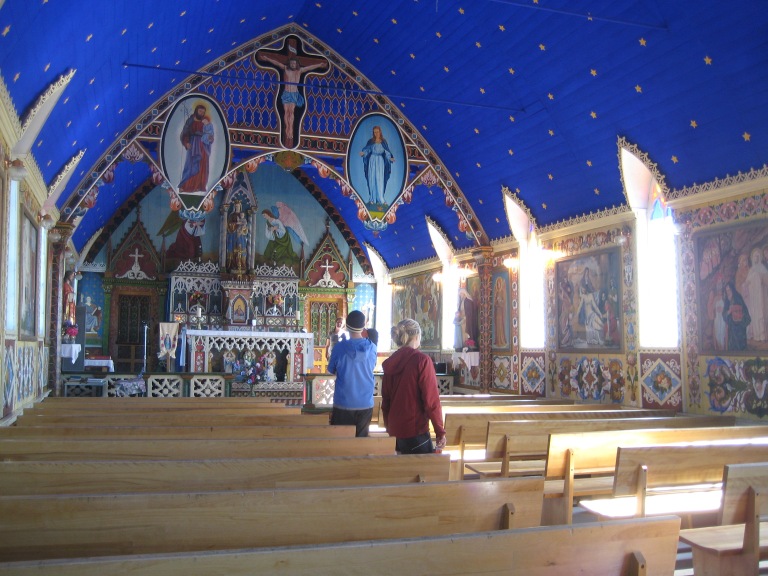 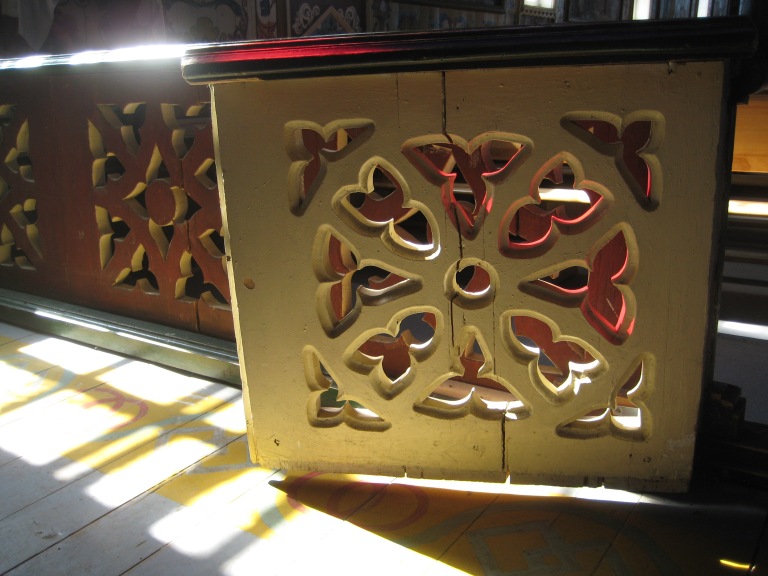 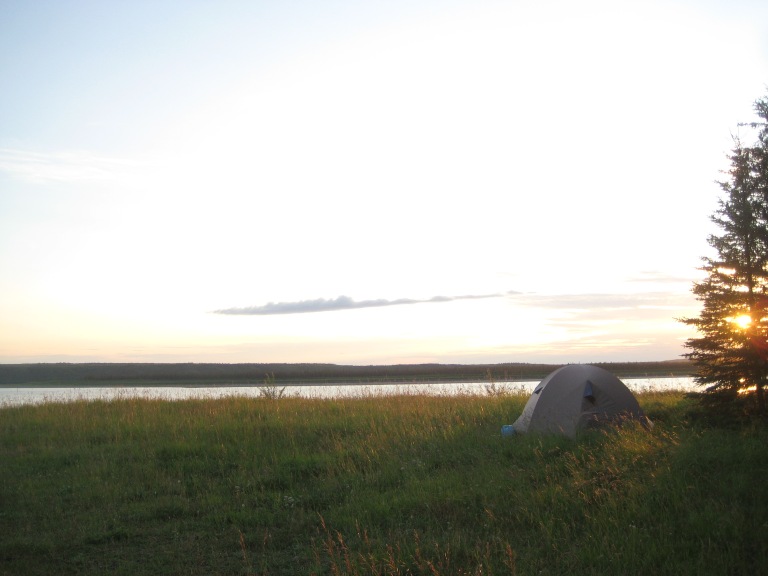 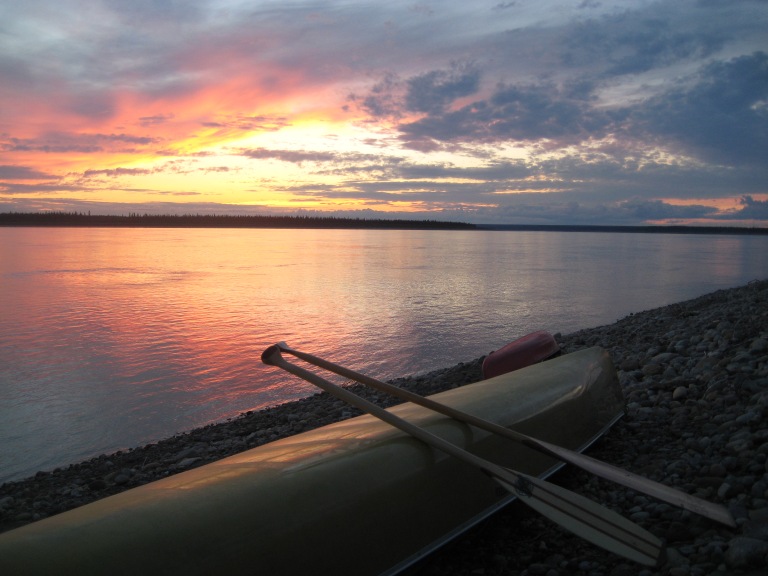 left on the earlier side today to be able to get to fort good hope before the northern store closed. we were headed into the rampart rapids knowing we were supposed to take the right side, but nowhere did we read just how soon we had to be on the right side. as emma and i took turns peeing off the boat in a brief calm spot between choppy waters, i looked further ahead and wondered what those whitecaps were doing up there. oops. it got a little hairy as we were being funneled towards the rapids. we managed to only go through one line of messy stuff before angling upstream and paddling as hard as we could. that did it, we broke free of the strong current and made right shore. holy. that was scary.

the ramparts were gorgeous and reminded me a bit of utah in places. we pulled over near the end where there is a statue of mary set high in the cliffs and went looking for fossils. will caught up with us here and we paddled on to fort good hope where we were delighted to see sac dene’s boats on shore. as we were walking down the road to the northern store the camp passed by in the back of a pick-up, so we got hijacked from our shopping mission and went with them to the church. the church – a national historic site – was exquisite.

later as we were getting ready to haul our stuff up to the yard in front of the church, we met a local man named joe. joe helped us get all of our stuff up the hill and then brought emma to the community center to fill up our drinking water. we were able to spend quite a bit of time with him and hear so much about his life here and his travels when he was younger. he told us sad and scary stories about cancer in fort good hope. if i remember everything joe said correctly, at one point FGH had the highest cancer rates in canada and there was one death a month due to cancer for about two years. he said there were many tests done and in the end it seemed some people believed it was from drinking the river water, the same river water polluted from all of the fracking/mining happening upstream in norman wells (not to mention alberta). the government was made to take notice and it dutifully upped the tolerable level of pollutants that were allowed to enter the water table. ahem. way to go canadian government.

throughout the night we met more local folks who talked with us about self-governance, education, residential school, loss of language, and traveling away for university. a jam happened later along with a short performance by a local band. an incredible, insightful and social day and night, and once again i feel surprised and thankful for all that these travels have brought us.