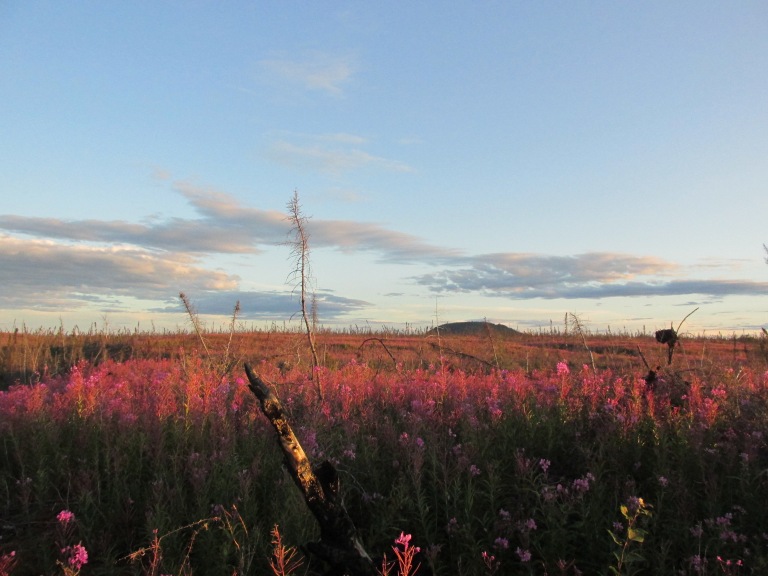 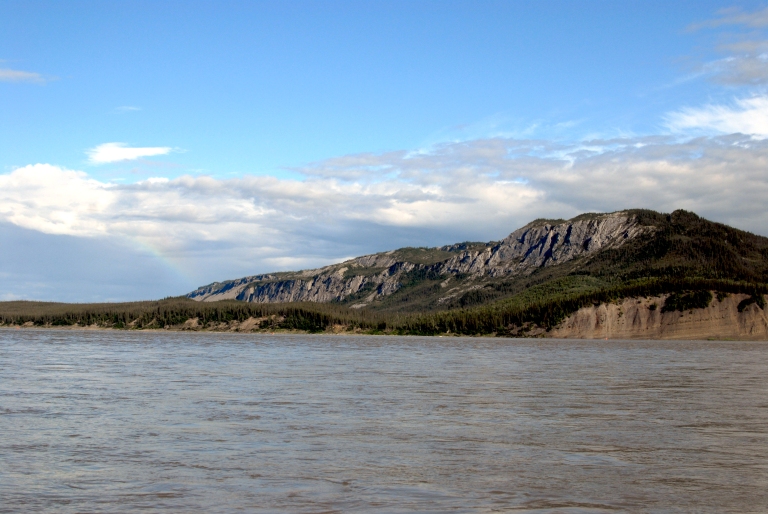 woke up at 10am and nat and ben came over a little while later to see if we wanted to run the (sans sault) rapids with them for safety. they are all so sweet! there was no way emma and i were going to be ready an hour after getting up, so we had to decline their kindness. some hours later we departed, stopping at the memorial on the ridge before continuing on to the rapids.

i was a little worried about the rapids because the mountain river pushed in on river left and, not knowing where the rapids started, i wasn’t sure if it was going to push us over far enough that we’d be in trouble. all turned out well. the rapids were way far right and looked pretty small from where we were. (we did hear later from will that they were HUGE, as he unintentionally went right through them. oh dear.) the left side (right of the sandbar island) was just fast water. after a rest on dummit islands to eat celebratory mussels, we paddled on into a calm radiant evening. after a bend the deh cho opened up to about 5km wide and was filled with sandbars. we like sandbars because they have wide views to keep a lookout for wildlife and generally don’t have many mosquitoes. we picked a sandbar at around midnight and got everything ready for bed. emma got in the tent ready to roll out her thermarest and i was about to hop in and join her when i looked over to the far willows to see a large black bear ambling around. me: oh my god. there’s a bear.

so, as emma and i discovered over the course of the trip from our few close experiences with wildlife, my tactics seemed to be: scare animal away first, ask questions later. emma took a less frantic viewpoint and watched the animal before reacting. therefore, in this instance with the bear that was about 1/2 a km away and had not yet noticed us, i started yelling and waving my arms trying to shoo it away. it started running so i told emma it was running away and headed to the other side of the tent to try to find the air-horn. emma looked out the window and said, um, i think it’s running towards us. and yes, yes it was. emma was out of the tent and we were both yelling and waving things about and using the air-horn. at some point the bear stopped running, but it didn’t necessarily seem afraid of our ruckus, just confused. emma suggested i shoot off a banger. by this time it had started running back from where it had come, but it wasn’t a very convincing i’m-running-away-from-you-because-i’m-afraid-of-you. it was more like i’m-running-away-because-it-seems-like-you-want-me-to-but-i’ll-be-back-later-to-sniff-around-your-tent-while-you-are-sleeping. this could just be me projecting. i shot off the banger (which was fun), but that seemed to confuse it further and it paused in its running. hoo boy. we continued with the ruckus and as soon as it had trotted back into the willows we broke camp and were back on the water 20 minutes later. 3:30am bedtime. gonna need a rest day soon.